When I was on Raasay in October I had a couple of close-ish encounters with a sea eagle.  We  passed each other crossing the island a few times and I was able to stop right on the road, get out and watch her flight with an entire island lying at my feet and no traffic jam to beep me on or throw exasperated arms in the air wondering what the hell I was doing.  As I left Arnish in Raasay’s North for the last time, I turned a corner and there she was, this time perched just metres off the road, watching me then watching Skye and the sea, letting me stop, get out to lean on the car and admire the scale of her so much better with less air between us.  I had breathed in deeply through my nose so my chest filled and puffed.  I chucked my camera back in the car.  All the better to see her with.  Then I realised her chest was the way of mine too but she was staying and I was leaving.

I’ve been thinking a lot about territory recently, from various vantage points of my own.  Maybe my experiences with the eagle were the real start of it – the consideration of what it is to move into a space and share it, without asking permission of the other inhabitants.  The knowing what it is to be at the top of the food chain and the beginnings of an appreciation for the fact that I can choose to respect or exploit that.   The overlap in all of that with human experience; what it is to live with someone you don’t normally live with, what it is to live alone, what the formulas are for positivity and co-operation as a group while still ensuring enough space for everyone to test their wings regularly too.

My husband and son became vegan last year and their decisions have brought awareness of animal welfare closer to my streams of thought.  Husband made the change to reduce his cholesterol – he’s naturally on the high side of those readings so self-help is prudent.  My son, on the other hand, choose veganism because the more he reads about philosophy and psychology the less he can reconcile eating animals.  And of course when one person in a habitat makes a change, everyone else in the same space kinda does too; a human choice eco-system at work; one which, in this case, has had me considering what I eat and, in even greater quantities of airtime, before we changed an animal’s name to meat or poultry, what was its story on the way to my hands?  The words territory, autonomy, captivity, economy and empathy keep bobbing around in my thought soup.  Part of me wants to push a stick-blender in with them and make it all something that’s easier to swallow while the other part doesn’t trust that that act wouldn’t be a murder of it’s own kind.  So I’m letting it be for now, knowing my brain is working on it while I dream of bizarre things in the nights.

The starting thoughts on territory were backed up by dealings with stags on the same Raasay trip  – and quieter hinds – the latter seen only briefly here and there, darting eyes a jangle of nerves at every footfall, their opportunities to eat in peace apparently never without a readiness to bolt, fast.  Such was the season.

When I arrived at Arnish back in October there were just one and a half hours of usable daylight left in front for a wander into the unknown.  Joining the blissful audio feeds of bird song and seashore were the inelegant, part-beligerent and part-desperate calls of rutting stags.

‘How nearby?’, I’d asked the owners of the Airbnb cottage I was renting.

‘Difficult to say’, they’d said, looking at the trees and rock on the other side of their deer fence.  ‘One’s definitely just up there and the other’s probably within half a K’.

My deaf dog sniffed at the air then checked my bearings and in the moment we agreed an adventure.  We’d leave the unpacking to a job with the head torch later on.  We’d walk outside the fence before dark and take our chances on what we might find and what might find us while we could do it without me stumbling.  The drive had been long and beautiful and I had just five nights to wring everything out of the experience that I could.  So we set off and didn’t come eye to eye with anything other than our own reflections in the glass of old croft house windows.  But the trepidation of every grunt and testosterone laden throat gargle belonging to the antlered ushers around us quickened my heart and dropped lines from my face like no wrinkle cream has ever managed.

There is nothing better for kickstarting the soul than surviving a shared adventure and having the iPhone photos to prove it.

Yesterday I went to the zoo.  The thought to go and see animals arrived in the night and beckoned for exploration, memories of the stags and the eagle calling me back to a limitless place inside myself, probably triggered by spring sunlight pushing its way around everyday spaces, making me smile without thinking.  But of course you don’t find limitlessness at zoos.  At zoos you find talk of research and preservation and squirrels who’ve worked out how to break in to enclosures to pinch food from animals whose instincts for handling vast territories have been forced to recalibrate to restriction, concrete under earth and discreet electric fencing as ever present, non-communicative company.

I thought about my territory yesterday too.  It’s mainly Edinburgh with frequent stretches across to Glasgow and down to East Lothian.  Less frequently I venture up to Aberdeen and Deeside and, at least once a year, if I was fitted with a tracking device, you’d see me on a screen heading north-west and stopping on an island to meander there for a week or so before winging back across Perthshire and the Forth.   Maybe once every 18 months I go to another country altogether, taking wing in a steel tube and marvelling at real time maps through tiny windows.  My territory, over my lifetime, is pretty enormous, especially compared to some of the chimps who’ve been at Edinburgh Zoo longer than the 42 years I’ve been alive.

I thought about how if I shrunk my territory in the same way as a Zoo meerkat’s is shrunk,  I’d be allowed a range that just about allowed me to peek at Linlithgow, I reckon, or Eddieston to the south.  Not enough.  Not enough for me by far. 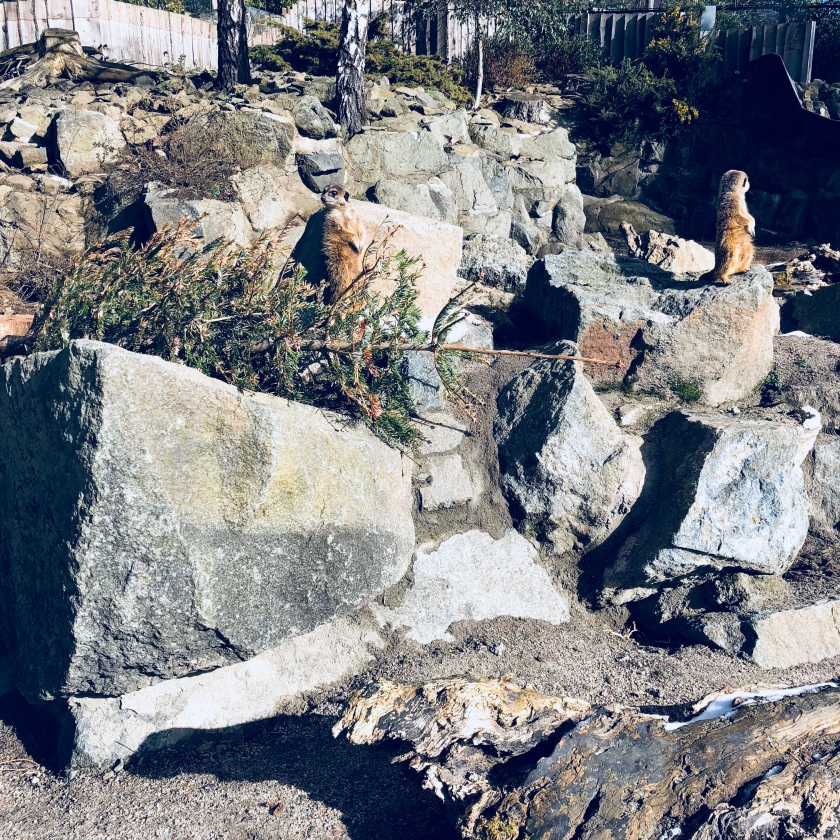 So the sea eagle and I have something else in common, apart from our sometimes puffed chests.  We have relative freedom – but me much more so than her.  Sea Eagles were reintroduced to Scotland in 1975 after being hunted to death in 1916.  I’m not sure it’s fair to say they’re thriving yet – perhaps tentative optimism is brave enough for now.  Secrecy is, after all, unbelievably still required about the bird’s nesting sites in order to protect them from humans who wish them harm through their own pursuits for trophies.

The bird I met on Raasay has family with datelines that intersect with my own life.  One of her relatives was around the skies over west Scotland that same hot summer of 1976 I arrived in a nearby part of the world.  We’re connected, albeit tenuously.  I find that comforting.  And while I’m absolutely still pondering territory, I’m definitely done with zoos.