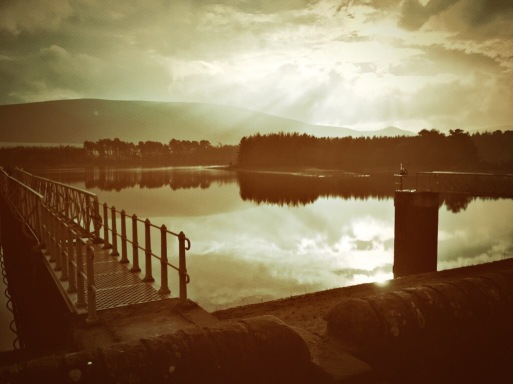 I’m not writing today because there are boots to buy for littler feet than mine. Emergency boots.  Oh-no-there’s-snow-and-she-only-fits-her-slidey-pumps-boots.  I watched her leave for the bus and almost covered my eyes with my hands, so sure she would slip any minute and be embarrassed to the ends of the earth and back again.  Everything is measured on the cringe-o-meter when you are a teen of mine, it seems.  Within the house (with the blinds at half-shut tilt), anything still goes.  Bring the general public into things, or sometimes worse – their friends (insert horror movie scream sound effect here) – and every decision is viewed through the super sensitive filter of worst case embarrassing scenarios.

‘Would you like to go the German market with me?’.

The dog sits nearby with an excited look on his face, the tip of his long tail metronoming quickly and silently on the wooden floor again.  He will go to the German market with me.  He has no cringe-o-meter. And he’s heard there are sausages with onions there, too. He almost dashes off to get his coat.  He’s a canine echo of how things were with totey wee people wearing mittens and hats and holding my hands.

Sometimes, if we’ve just finished a series of one of my speciality parenting pep rants, say, the one about ‘who cares about ‘people who  laugh about other people anyway’, daughter’s lips says a resounding yes too and spontaneity is re-installed and reigns glorious for a while.  The tug of teenage confidence war gets put away temporarily and I can tell myself that there’s a possibility I’m winning the war, if not the individual battles.  We go to the German market.  We see other teenagers with their parents.  We see teenagers without their parents and daughter does not die of embarrassment, she simply eats her Nutella waffle and realises the world will keep turning, whatever she does, so she may as well do what she wants. I sit by her and realise I’m realising exactly the same thing and I’m 26 years her senior.  Who am I to try to rush the process of learning by layering experiences?

My son told me recently that I shouldn’t take it personally,  no-one really wants to be seen with their parents when they’re teenagers.  Just as I was about to protest and point out that some people were really OK with it I remembered my own teenage feelings about my Mum and Dad.  We can largely cover my attitude to my parents through that period with the three Ds – denial, disgust and distance.  The more I had of each, the better.  Back in the shoes of the parent I am suddenly aware once more that I have it good, relatively speaking.  The kids will still sit closely with me at home.  We do still chat and laugh.  I can hug them without fear of violence or verbal attack.  I know at least some of their inner worlds because of fleeting glances and titbits offered here and there.  I am allowed into their bedrooms (if I knock and don’t sing too much).  I’m aware this is all good; that it’s best to be content with the privilege of all of that  for the moment, just in case pushing for anything else might accidentally push them to a place I’m not allowed to be.  They are each making a whole new person, after all.  Strange as it is I know that sometimes I need to be the thing they look at and decide to be different from, rather than the same as.

‘Give them roots and wings’, a wise parent of older kids than mine once told me.

You take a truth and make it your own: Give them Roots, wings, space and waffles, I say, for the teen years anyway. And some winter boots.